Tamresari temple, also known as Kesaikhaiti, is situated about 18 km away from Sadiya in Dibrugarh district now Tinsukia district, Assam, India. It is the remains of an old temple built by the Chutiyas in the 15th century.The original Assamese word is Kesaikhaiti (kesa means raw and khaiti means eat), refers to a semi-pre-Hindu Goddess, a version of Goddess Kali, who accepts offerings of raw meat, hence the name (someone who eats raw).
History of the temple
The name Tamresari The wall and doors of the temple were well designed with beautiful works. There were two giant elephant sculptures with silver tusks at the main door. The walls were made without any mortar.The temple roof was made of copper(tam in assamese), that’s why it is called Tamreswari. The whole temple was surrounded with brick walls and on the western wall there was a place for human sacrifice.  Ancient rituals at the temple The Chutiyas who built this temple worshipped various forms of Kali with the aid of their priest Deoris.The favourite form in which they worshipped this deity was that of Kesai Khati,”the eater of raw flesh “,to whom human sacrifices were offered. After their subjugation by the Ahoms,the Priest were permitted to continue their ghastly rites;but they were given for the purpose,criminals who had been sentenced to capital punishment.The person selected was fed sumptuously,until he was in sufficienly plump condition to suit the supposed taste of goddess and he was then decapitated at this Copper Temple.
How to reach temple
BY FLIGHT
Instead of Tinsukia you can a get flight to Chabua Airport on regular basis Tinsukia 41 km away Chabua Airport (DIB), Dibrugarh, Tinsukia 141 km away Rowriah Airport (JRH), Jorhat, Assam Tinsukia
BY TRAIN
There are regular trains from other major cities of the country to Tinsukia. Railway Station(s): New Tinsukia Junction (NTSK), Tinsukia Junction (TSK)
BY BUS
Tinsukia is well connected to other major cities of the country via regular buses. Bus Station(s): Tinsukia 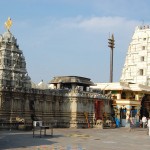