Arasavalli Sun Temple which is devoted to the Hindu solar god Surya, sited in this village. The actual name is Harshavalli, which means abode of joy. It is trusted to have been constructed in the 7th Century AD by the Kalinga rulers Devendra Varma of Orissa.

The renowned Sun God Temple located in Arasavalli Village which is about 1 K.M. of distance to the east of Srikakulam Town District, Andhra Pradesh. According to Padmapuranam , Sage Kasyapa established the statue of Surya at Arasavalli for the Welfare of mankind.

Lord Devendra found this temple, according to the ‘ Sthalapuranam’ and established the existing deity of the sun God known as Lord suryanarayana Swamy Varu in the following conditions.

Once Lord Devendra attempted to enter for the Darshan of  Sri Rudrakoteswara Swamy varu paying no attention to the words of Dwarapalaka Nandi at an untimely hour when Lord siva was along with his consort . The Dwarapalaka Nandi kicked the interloper in order to fulfill his duties. Thus Indra got injury in his chest and fell down senseless. Indra dreamt in his insensible state that he would be relieved from the pain caused by Nandi, if he had built a temple and establish an statue of the Sun God . After he became conscious he remembered the dream and picked up hand full of earth three times at a place where he laid, and there he found this stunning statue of sun God with his three consorts Usha , Chaya and Padmini . At the bottom of the idols are the figures of Mathara and Pingala the Dwarapalakas andat the top are the two divine saints, sanaka and sanadana holding an Umbrella. The Sun God is described as riding over a chariot drawn by Anura, the Radhasaradhy . All these statues are finely carved out of a single black delicately polished granite stone.

Places to visit nearby temple: 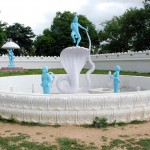