Aryankavu is a beautiful hillside village, 31km away from Punalur, Kollam district, Kerala. The prime geographical feature of Aryankavu is the Western Ghats passing through its terrain. This mountain pass of Western Ghats is easily accessible through Punalur to Shenkottai metre gauge railway line.

It lies on National Highway 744 near Thenmala. Aryankavu is 78 km away from Kollam, Paravur, 81 km and Punalur, 36 km.

The Ayyappa Temple at Aryankavu in Kollam District, is one among the five chief temples dedicated to Lord Ayyappa in Kerala. Arankavu temple worships Lord in the form of a teenager. Ayyappa is known as Tiru Aryan and so the place got the name Aryankavu.

The shrine is located in between forests, on the Trivandrum – Tenkasi National Highway. Females from 10 years to 50 are not allowed to enter the temple, similar to Sabarimala Temple. Although the temple is in Kerala, it follows pujas and rituals as per the Tamil customs. The temple, is made 35 feet below the regular pathway, has idols of Devi, Shiva and Sastha. A teen Ayyappa sits in the middle with Devi on the left side and Shiva on the right side. The architectural work done in the temple premises are one of a kind.

Almost 5 km away from Aryankavu vehicle check post, in the forest lies the Palaruvi Falls. Palaruvi is basically made of two different words of Malayalam language. The name `PAL’ means milk & `ARUVI’ means stream. The literal meaning of the word is ‘Stream of Milk’. Crystal clear water falls from over a height of 300 ft. and gets collected in a small pond allows you to take bath in nature.

The kings of bygone era visited this place in the past, grand mandapams or impressive cottages built by Maharajas of Travancore can be found here. The route to this fall location is a bit difficult as the forest pathways are muddy. It’s worth visiting this place, trekkers will enjoy the journey.

Rose mala is the enchanting ecotourism destination of Aryankavu about 12 km away from the main railway junction of Aryankavu. This area is scarcely populated mainly by farmers and tribal, it is a dense forest. There are many spots scattered across Rosa mala especially the view of Thenmala dam set against the backdrop of lush green hills.

Other places of interest in Aryankavu include Bourdillion’s plot, world’s first stumped planted teak gardens. Sandal forest at Kadamanpara, which is the second largest sandal forest of the state. Nedumpara, one of the highest peak, 11 Km away from aryankavu.

Nearest airport: Thiruvananthapuram, about 95 Km away. 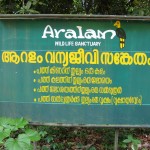 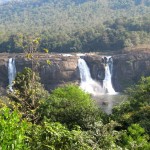