The Bhairabi Temple is situated in the outskirts of Tezpur, Assam. The temple is dedicated to Goddess Durga and the backdrop of the temple provides a view of the Kalia Bhomora Setu, which has been built across the Brahmaputra River. The local people of the place also refer to this temple as Bhairabi Devalaya and Maithan. According to legends, Usha, who was the daughter of Asura King Banasura, came regularly to this temple for worshipping Goddess Durga. The sacrificing offerings at this temple include bulls and goats. Its maintenance and management are under the supervision of the District Deputy Commissioner. The way to reach the temple goes through a long path of staircase. Along this way there are small shops that provide items like ghee lamps, incense sticks, fruits, sweets, etc. The famous Bamuni Hills also lies at a few km from this temple.

History
The Goddess Bhairavi is worshipped here as She is one of the Mahavidyas of Ma Durga Devi. It is a very important Shakti Peeth of Assam. The backdrop of the temple is a view looking towards the Kolia Bhomora Setu across the Brahmaputra River. The temple site is also locally known Bhairabi Devalaya. Legend has it that Usha (daughter of mighty Asura King Banasura) regularly came here for the worshipping of the Goddess. About a couple of kilometres away lie the Bamuni Hills where one can view the ruins of the palace that stood many centuries ago. The art work on stone carvings that were used within the structure are from the 9th century. Likewise, the 400-year-old Bhairabi temple has tilted slightly and a nearby building suffered damage to the west and south sides of the second and third stories and cracked the pillars and an unhinged roof due to an earthquake.

Management
The temple is now managed by the government through the office of the District Deputy Commissioner and the Temple belongs to the family of the Borthakur’s of Tezpur (Shri Dilip Borthakur,Shri Barenya Ranjan Barthakur, and Shri Aditya Prakash Barthakur). There are sacrificial offerings of goats, ducks, pigeons, etc. that still occurs regularly here.The Durga Puja celebration is performed in a very grand way in this temple. The entrance to the temple is through a very long staircase that leads up from the approach road to the temple itself. There are numerous facilities for the purchase of ghee lamps, sweets and fruits etc. that are offered during prayers for blessings. This is really a place of scenic beauty and a path towards The Divine. The temple is a sidhapitha where people offering prayer and fulfill their wants with the blessings of Maa Bhairabi. A people who believe in Goddess he or she can only get the blessings.

How to reach the Temple

1.How to Reach Bongaigaon by Flight

Lokpriya Gopinath Bordoloi International Airport, located in Guwahati, is the nearest airport . This airport is located at a distance of around 100 kilometers from Bongaigaon

2.How to Reach Bongaigaon by Train

3. How to Reach Bongaigaon by Road 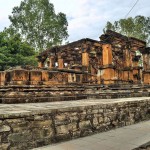