Kedarnath is the ancient temple located in the Rudra Himalaya range at the head of the Mandakini River and is considered highest among the 12 Jyotirlingas. The temple is dedicated to Lord Shiva and located 21 km from Sonprayag at an altitude of 3581 metre from the sea level. The temple was built in the 8th Century AD. At Kedarnath, Lord Shiva manifested in the form of Jyotirlingam or the cosmic light. Kedar is another name of lord Shiva, the protector and the destroyer. Shiva is considered the embodiment of all passions – love, hatred, fear, death and mysticism which are expressed through his various forms. The present temple was built by Adi Shankaracharya.

The temple is built of massive stone slabs over a large rectangular platform. Inscriptions in Pali language can be found on the steps leading to the holy sanctum. The mention of the revered temple can be found in the great epic – Mahabharata. After the battle of Mahabharata, the Pandavas are believed to have sought the blessings of the Lord Shiva to atone their sin. Outside the temple door a large statue of the Nandi Bull stands as guard. A conical rock formation inside the temple is worshipped as Lord Shiva in his Sadashiva form.

The shrine closes on the first day of Kartik (Oct-Nov) and the holy statue of Lord Shiva is carried down from Kedarnath to Ukhimath and re-instated at Kedarnath in the first week of May. During its closure the shrine is submerged in snow and worship is performed at Ukhimath. It is at this time, that the doors of the temple are thrown open to pilgrims, who flock from all parts of India, for a holy pilgrimage.

The best time to visit this shrine is from May to October. 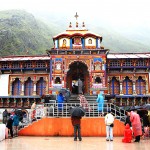 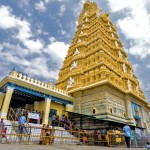