The Konark Sun Temple is a 13th-century CE sun temple located 35 kilometres (22 miles) northeast of Puri city on the coast in Odisha’s Puri district. The temple was built in 1250 CE by King Narasimhadeva I of the Eastern Ganga dynasty. What remains of the temple complex, dedicated to the Hindu Sun God Surya, resembles a 100-foot (30 m) high chariot with massive wheels and horses, all carved from stone. The Konark Sun Temple is a well-known Hindu temple devoted to Surya, the Hindu god of the sun. “Konark” is a Sanskrit term that combines two Sanskrit words: “kona,” which means “corner” or “angle,” and “arka,” which means “sun.”
Arka khetra is another name for Konark. Odisha is divided into four khetras, or regions. According to legend, after defeating the demon Gyasur, Lord Vishnu placed his four ayudhas (items held in his four hands) in various locations to commemorate the victory. The Sankha (conch) was placed in Puri, the Chakra (disc) in Bhubaneshwar, the Gada (mace) in Jajpur, and the Padma (lotus) in Konark. As a result, Padma khetra is another name for Konark. 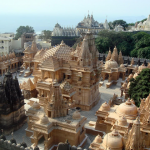 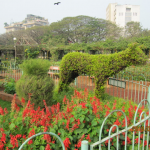 The Hanging Gardens of Mumbai