Kuttikkanam is an exquisite hill station situated about 3,500 feet above sea level near Peermade in Idukki district of Kerala, India. This place is covered by lush green forests, tea and cardamom plantations and a wide range of wild life. A large portion of forest area is reserved in Kuttikkanam, which houses varied flora and fauna, also includes some wild animals like bison, tigers & monkeys, etc. With cascading streams, hills and valleys, this place is blessed with natural scenic beauty and its cool and favorable weather conditions attracts tourists all throughout the year. Kanjirappally and Mundakkayam are the nearest cities.

Back in the 16th century this region was ruled by Changanacherry kings, later in 1756, Kuttikkanam was conquered by the King of Travancore. The tea and coffee plantations were started by a Church Mission Society missionary, Henry Baker, and under the authority of Sri Moolam Thirunal the region become popular for tea plantations. The British turned, Kuttikkanam into an up-market resort and also introduced the Aerial Ropeway Ltd, Travancore state’s first public limited company.

According to the legend of “Mahabharata”, this place was one among the many hiding sights of the Pandavas and Panchali. A beautiful viewpoint, from a pond known as Panchalikkulam the “Makarajyothi”, can be seen, the divine flame lit during the pilgrimage season in Sabarimala.

Popularly known as Ninnumullippara, is a waterfall about 75 feet high and mostly covered in fog, are one of the main attraction of Kuttikkanam.

A rock sculpture about 150 ft (46 m) high and about 3,800 feet (1,200 m) above sea level, also known as Parunthumpara among locals. Best place to get a panoramic view of the whole Peermade territory.

Peeru hills:
At a distance of about 1 km lies the Peeru hills a must visit place known for its greenery and pleasant surroundings.

Thottapura:
The royal family of Travancore used to store their weapons at this place.

Azhutha Diversion Project:
The Kerala government project built on the Azutha river, in order to divert water to Idukki Reservoir via a 987 m long tunnel.

Artificial forest:
The forest is classified as a buffer zone by the Kerala State Forestry Department as it houses an estimated 30 species of birds, some of which are highly endangered. Almost 100 acres of dense pine forest is a must visit sight for nature lovers. 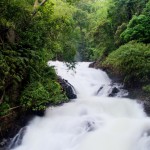 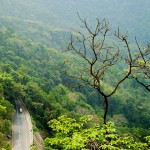