Lakkidi is one of the highest locations in Wayanad district, Kerala. It is situated 700 meters (2296ft) to 1150 meters (3772ft) above the sea level, atop Thamarassery ghat pass. It is also regarded as the Gateway to Wayanad hills, which houses dense forests, beautiful waterfalls, green mountain peaks and various water activities. Lakkidi registers an average 600 – 650 cm annual rainfall being the second highest degree in the world. It is often called as “Chirapunjee of Kerala”.

There are lots of tourist attractions around such as Kalpetta, Vythiri which is just 5 km away, Pookode Lake lies about 3 km from Lakkidi, the natural fresh water lake, spread across 15 acres, one of the rare reservoirs of water in Wayanad. Chain tree, Sight-seeing point on Ghat road, all these places offer descent and economical accommodation facilities. Resorts, cottages and hotels are also available. To the North-East lies the Kozhikode district, which is around 58 km away from Lakkidi.

It is surrounded by green mountain peaks, cascading streams, amazing weather and a bird’s eye view of the deep valley, with its winding roads on the southern part. Lakkidi is one of the richest biodiversity regions in the Western Ghats. A good variety of birds and animals such as Indian Shag (phalacrocorase fuscicollis), lion tailed macque, Little Green Heron (Ardeola striatus), Pond Heron (Ardeola grayii), and Little Cormorant (Phalacrocorax Niger) can be seen here.

During the colonial rule, a British engineer took help of a local Adivasi called Karinthandan to identify the secret route through the ghats of Lakkidi, after discovering the shortest route, the engineer assaulted Karinthandan, in order to take the credits for finding the route. According to the locals that the travelers who passed by the new route were haunted by the ghost of Karinthandan, hence a padre was called and in a chain his spirit was called and tied to a small tree. The chain grows along the tree, the locals say, and on the 2nd Sunday of March every year a Karinthandan Smrithi Yatra is organized by an NGO called PEEP, in the memory of the first martyr of Wayanad, Karinthandan.

The best time to visit here is between the month of August and March. 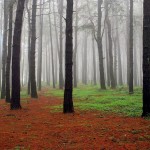 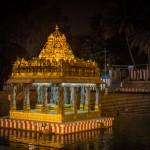