Mehrangarh Fort is a 1,200-acre (486-hectare) fort located in Jodhpur, Rajasthan, India. The complex was built in 1459 by the Rajput ruler Rao Jodha on a hilltop that rises 122 metres above the surrounding plain. The fort was given the name Mehrangarh, which means “fort of the sun,” referring to the clan’s mythological ancestry with the sun god Surya. There are many palaces within its walls that are notable for their beautiful carvings and vast courtyards, as well as a museum that houses various treasures. The city below is reached through a twisting route. The impact of cannonballs fired by Jaipur’s assaulting army can still be seen on the second gate. The chhatri of Kirat Singh Soda, a soldier who died defending Mehrangarh, is located to the left of the fort. It is today recognised as one of India’s best-preserved forts.

There are seven gates, including Jai Pol (which means “victory gate”), which Maharaja Man Singh built to celebrate his triumphs over the armies of Jaipur and Bikaner. A Fattehpol (also known as a “victory gate”) celebrates Maharaja Ajit Singh’s triumph over the Mughals. The World Sacred Spirit Festival and the Rajasthan International Folk Festival are two significant festivals that take place here. 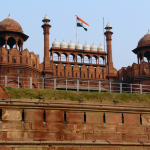