Amba Vilas Palace, popularly known as Mysore Palace, is a historical palace and royal residence in Mysore, India. It is located in the state of Karnataka, in the city of Mysore. It was once the Wadiyar dynasty’s official house and the seat of the Kingdom of Mysore. The palace is located in the heart of Mysore, facing the Chamundi Hills to the east. Mysore is known as the ‘City of Palaces,’ and there are seven of them in all, including this one. The Mysore Palace, on the other hand, refers to the one located within the Old Fort. With over six million annual tourists, Mysore Palace is one of India’s most well-known tourist sites, second only to the Taj Mahal.

How to reach Mysore Palace?

By Air: Nearest airport is Mysore Airport also known as Mandakalli airport.
By Rail: The railway station in Mysore is located in the centre of the city
By Road: By Cab/Taxi or By Bus 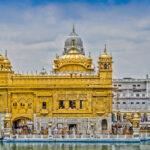