The Red Fort, also known as Lal Qila, is a mediaeval fort in Old Delhi, Delhi, India, that served as the Mughal Emperors’ principal palace. When Emperor Shah Jahan chose to move his headquarters from Agra to Delhi, he ordered the construction of the Red Fort on May 12, 1638. Its design, which was originally red and white, is due to the architect Ustad Ahmad Lahori, who also built the Taj Mahal. Under Shah Jahan, the fort marks the pinnacle of Mughal construction, combining Persianate palace building with Indian customs.

During Nadir Shah’s conquest of the Mughal Empire in 1739, the fort was looted of its artwork and valuables. Following the Indian Rebellion of 1857, the British demolished the majority of the fort’s marble constructions. The fort’s defensive walls remained undamaged, and it was used as a garrison after that.

Jawaharlal Nehru, India’s first Prime Minister, raised the Indian flag above the Lahori Gate on August 15, 1947. Every year on India’s Independence Day (15 August), the Prime Minister raises the Indian tricolor flag at the fort’s main entrance and gives a nationally broadcast speech from its ramparts.

The huge Red Fort (Lal Qila), with its red sandstone walls, rises 33 metres above the clamour of Old Delhi as a reminder of the Mughal rulers’ great strength and splendour. The walls, which were erected in 1638 to keep out attackers, are today mostly used to keep out the city’s noise and turmoil. The main gate, Lahore Gate, is one of the contemporary Indian nation’s emotional and symbolic focal points, attracting a large crowd on Independence Day.

Overall, it is one of the most popular tourist destinations in India where people can relive history. 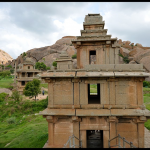 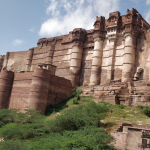